Every homebrewer wonder how wild hop can be used, wich flavours will producce in the beer, and how drinkable can be a beer with wild hop.
I found wild hop flowers last september, biking around the countryside. Those flowers had no aroma, but a lot of oils and resins: my hands were sticky after collecting hop, and was a mess to get the bike handle in my hands after. 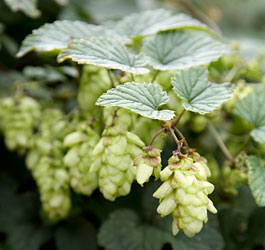 I forgot the hop in the freezer for months, then I run out of hallertauer while brewing a Bock: I decided to go on with the original recipe with fewer liter, and use 3 liters at the end of the sparge for a separate boiling, with the 150g of this wild hop (not dry, fresh freezed) and at the end I got two liters of wild hopped beer.
I called that beer Martesana, as the name of the artificial waterway that runs in the countryside where I collected the hop: sparge leftovers, wild hop and recicled Bavarian lager. Despite the ingredients, the beer turned out drinkable: no off-flavor, no garlic or onion smells like the wild hops I found in the past. Well, no hop aroma at all, and very low bitter, but OK for a kinda Bock: obviously not the best bock I ever drinked, not even the worst.

So, if you find wild hop and the flowers have no strange arome, they can be used to brew. Anyway, I used 150g for two liter, so you will need one-two kilogram of wild hop for a normal batch. I think it's not worth...