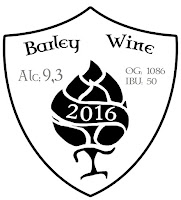 Same recipe as past year (at least I try), Pale and Munich (20%) as base malts, with a little Crystal and Chocolate (3% each) plus raw cane sugar to reach 1085 OG. Decoction, plus ninety minutes boil will enhance malty notes, caramel, melanoidins, dried fruits...
Fifty IBU, with a little Chinook at twenty minutes boiling to add fruity and piney notes. This is not an American Barleywine, but a little american hop helps.

This year I'm gonna bottle everything soon, the Barley Wine will agge in bottle. No maderization experiments this time: it's the same recipe al last year that I splitted to maderize half: this second version was not as good as the original one, as it lost a lot of malty notes, red fruit and dried fruit aromas, while the portlike tones were not enough to balance the loss. 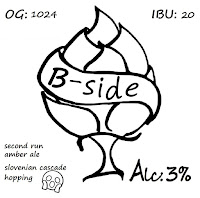 What I like about Big Beers is also the B-Side: a low OG beer made with sparge leftovers. Here I have a 1030 OG beer, hopped with a slovenian Cascade. Less zesty than the American one, less grapefruit, but ok, similar to a Galaxy. I had to acidify sparge water to avoid astringent in so low beer, and I succeded. Easy drinking beer!
a maggio 07, 2016