Last bottled beer is my Black IPA, 666: O 1066 and 66 IBU. Last year the beer was OK, my first Black IPA, and for the next version I just wanted to use some Chinook instead of Amarillo, to add more piney-resiny flavors, and move more hop in flavor and aroma, leaving a minimum amount in first wort hopping.
As usual, when I look at the ingredients, I have to change many things: no more Amarillo, so I used Simcoe. Then I fermented on a S-04 cake instead of US-05, so mas had to be lower, as well as the quantities of crystal: with a less attenuant yeast is better to give him more fermentable sugars, to keep te same FG as last batch and avoid the clogging sweet effect of an underattenuated beer. In the end, I changed bot grist and hopping. 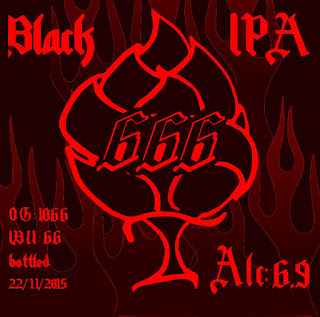 Now I hope the 6 grams per liter in late boiling are enough for a good aroma, as I don’t like Dry Hopping in my beers. And I hope Simcoe smell of sweated armpit will lower down while maturing: is the second lot I use from that hop, and it gives the same bad smell as previous lot.
a novembre 30, 2015